Family friendly airline review by Carrie Bradley – including information gathered from flights between Bangkok to Sydney, Melbourne to Singapore, Singapore to London Heathrow,  Sydney to Melbourne and Melbourne to Adelaide.

Our first flight with Qantas was after breaking up our journey in Bangkok for a couple of days, after a flight from London. We were fairly well rested and ready for the next leg to Sydney with our 12 month old almost walker.  This flight was a codeshare with British Airways (Qantas now codeshare with Emirates) so  I was very fortunate that British Airways requested a bassinet for me and I also rang up Qantas to request one. I really wanted to cover all bases and get that coveted bassinet – especially as Qantas bassinets are suitable for up to 18 month olds. Qantas have a policy that the youngest babies have first preference over  the bassinet, and they are not usually allocated as far in advance as ours were.  I’m not sure this tactic will work every time, but I was incredible grateful that I knew our seat numbers on all  sectors 6 months in advance! So far I was very happy and found this part very family friendly.
The outbound sector was a night flight and the bassinet as mentioned was 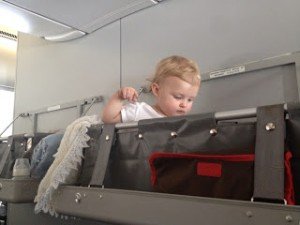 perfect for my 12 month old. The added bonus on Qantas is that an infant does not need to be removed from the bassinet when it is turbulent! As routes over Asia often have a fair few bumps, this was very welcome news. Only Virgin Atlantic also have this policy.  The crew were great on this sector and we lucked out by having a spare couple of seats immediately behind our bassinet row – so again my husband and I took turns with being on duty. We even both  managed to watch a movie!
The remainder of the flight was mostly uneventful and although she certainly didn’t settle as well as she would at home, or when she was younger, she managed a few of hours sleep.  However, although our little one slept, it was quite tough of us to sleep  a bit later on, due to a disruptive passenger on the flight behind us. He had been drinking a bit and was warned by the crew to quieten down.  All I could think of was please don’t wake her up!
Thankfully she didn’t and the crew gave us a lounge pass for our connecting flight to Melbourne.

For the breakfast service Little A, had some bread from our trays as she was too old for a baby meal, but I also brought along some cereal and some Ella’s Kitchen pouches. Whilst in Thailand, I also picked up some blueberries and fresh fruit for her. Be aware that all fresh produce MUST be destroyed before flying into Australia and all food items declared – including baby milk and food. We were fine to bring the baby milk and food through customs but it is essential to declare it. Qantas also had complimentary strollers in the airport terminal, which proved handy,  when we were in transit for Melbourne.

Onboard the A380, there is more legroom on longer journeys and the seat recline offers lumbar support.  There is an  adjustable headrest, with side wings supports your head while sleeping. The seat back has a TV screen  with over 1000 hours of options covering new release movies, TV box sets, music, moving maps and interactive games for all ages. You’ll have the freedom and flexibility to watch inflight entertainment from the moment you step onboard, including take-off and landing.

The return sector was another story. Little A’s nappy rash had returned and there was more teething  – meaning she was crying a lot, even with some calpol.  This time we went all the way through from Australia to London Heathrow via Singapore. The Melbourne to Singapore leg involved my husband standing up with her in the galley. He was of course very uncomfortable as holding a 12m old for any length of time is incredibly tiring. The kind crew let him rest on the jump seat and she fell asleep for a hour or two. We both took turns and managed to get a few cat naps in. Arriving into Singapore we were both exhausted and still had 14 hours to go but we let her crawl about in the transit lounge.  This sector was similar –  with us again taking turns with walking her around the galley. Thankfully this was an A380, so there was lots of space and the seats were quite comfortable.
We obviously didn’t make much use of the in-flight entertainment, as all we wanted to do was sleep at any opportunity,  but there was a good variety of programmes available. I’m not quite sure how we made it back to London, but we did! This goes down as my worst flight with little ones, but it was not a reflection of the airline- just bad luck with a poorly toddler.

Other entertainment for kids on Qantas

Qantas have new complimentary kids’ kits  for children (3 to 6 years). The new kits include an aircraft window shaped etch-a-sketch and activity booklet in a zip-lock bag. These are available on domestic and international flights. On selected international flights,  socks featuring Matilda the kangaroo are also provided.

The short haul flights were really nice and easy. Allocated seating, bottles of water and little snacks were handed out by the friendly crew.  We were offered a pillow as we had a baby which was appreciated. There was no TV, so the iPad proved useful for a couple of shows she liked – Baby Jake and Peppa Pig. We even all managed a little nap.

I am really impressed that Qantas are one of the few airlines that allow babies to remain in their bassinets during turbulence- a god send as flights over Asia are often a bit bumpy. The staff were good and helpful when they could see we had a poorly toddler. I don’t think they normally allow passengers to sit in the crew jump-seats ( some airlines do, it’s just individual policies),  but it was refreshing to see that genuine empathy was there. The A380 was comfortable and if you are travelling and are lucky to get the E/F seats on the bassinet row, then the armrest comes up, which could prove handy if you have another child. Another nice touch was the availability of airport stroller sat most Qantas terminals. They are dotted around a bit, so can’t be guaranteed to be found in once place, but handy nonetheless. I haven’t flown long haul with Qantas with a baby older than 12 months yet, so I would be interested to know if they are as family friendly for longer routes, but they were certainly welcoming to my 4 year old and 1 year old when flying domestically.
Pin save for later 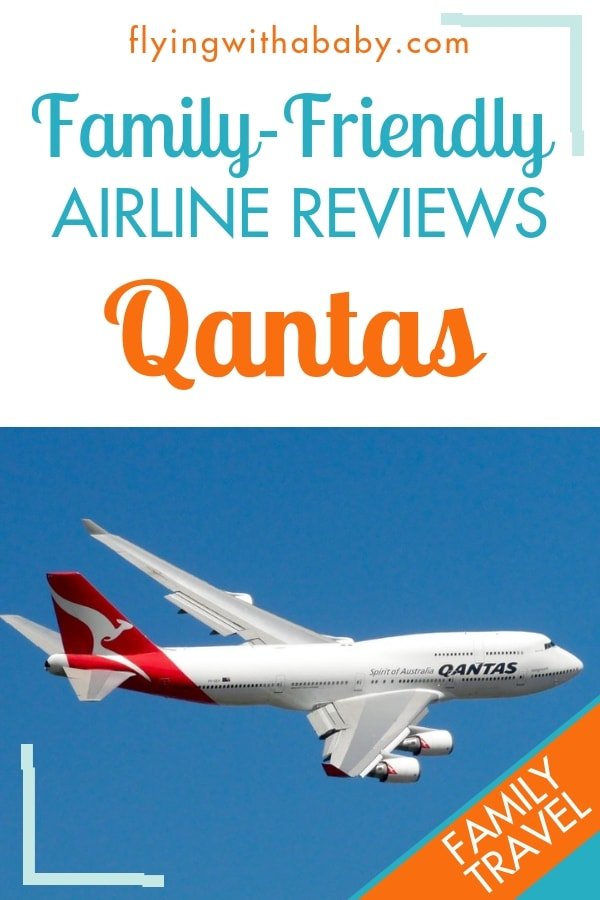 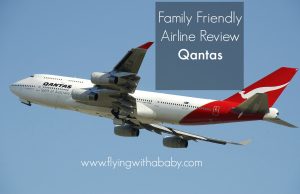 Hi! Have you or do you know of anyone who has flown on the new Qantas dreamliner (Perth to London)? It's a long flight - 17hours! I'll be travelling with a 20 month old baby so I'd like to know how it went for anyone who's done it as I'm still deciding which airline to go with.

Hello - I don't yet but I've flown 15 hours straight with the kids. It helped it being a night flight for a big part of it, but otherwise, all the normal tips definitely do help!