Real experience by Carrie Bradley. I’ve flown numerous times with British Airways with a baby or toddler -including flights to Cape Town, Bangkok, Boston and Tenerife. This is a family friendly airline review of all those flights with an overview at the end.

For any FAQ on flying with a baby on British Airways see here.

For short haul, the flight to Tenerife the flight was smooth and the flight was absolutely fine with an 18m old – this was aided by a spare seat being next to us. However, as we fly long haul quite regularly  a couple of hours flight seems very quick for us. I took along some water colouring books to minimise any mess, along with some other travel toys. This kept her amused as we were not given any activity packs on this flight by the staff. As she was too old for a baby meal, we just bought our own snacks on board. The flight departed early in the morning from LGW, so we ate breakfast at the airport.  The return flight was equally smooth. I found it was a great help knowing where we were seated before the flight.

Long haul with an 11 week old

My first impressions of British Airways are that the whole process was very efficient. I LOVE how you can choose the bassinet position as soon as you have booked your seat online. This was especially important for me when travelling long haul. On a short haul sector bassinets are not available but you can still choose your seats. For Cape Town my eldest was only 11 weeks and this was her first long haul trip. She fitted perfectly into the bassinet which was the cot style type. As she was on milk still there was no need for me to request a baby meal.

The check in process was very smooth. As this was the first time flying long haul, I opted to gate check our bugaboo cameleon travel system. I had previously purchased a travel bag for it, and although I practiced before the flight, it was a still a bit of a panic dismantling it before the rest of the passengers boarded. For future flights, I’ve found using a baby carrier  much easier. ( For the best baby carriers for travel see here).

Night flight with a baby

The outbound flight was a night flight, and it wasn’t long before the cabin lights were off. We were VERY lucky as the outbound B747 flight was pretty empty and the crew offered us the option to move to a row of empty seats EACH. As the bassinet rows armrests do not move up, this is a great option. Needless to say, they didn’t need to ask us twice – so the bassinet went unused and we both had a row of 3 seats to ourselves. This worked brilliantly as we both took turns to be on duty with little A. Whoever was on duty, could still stretch out, make sure baby A didn’t roll off the seat and actually watched a movie. She slept until top of descent and we both had a few hours sleep. Possibly the easiest flight ever.

Day flight with a baby

On the return sector, it was a day flight and this time the flight was packed – so we did make use of the cot style bassinet. After her normal feeds, little A took it all her stride and slept every 4 hours for a total of about 8 hours. The only frustrating bit was when the seatbelt sign was on, and I had to change a leaking nappy on my lap. There really was no option but to do it then and there. However, the crew politely asked me to wait next time to use the changing facilities in the loo. Obviously, I completely understand  changing a smelly nappy is not a pleasant sight, however I was  seated by the window with my husband in the middle seat – and discreet. The offending article  was wrapped up several times, until I could dispose of it. I figured that this was still better than letting the smell prevail through the cabin. Apart from this tiny hiccup this flight was great.

Long haul with a 12 month old

On this occasion we were flying to Australia  with a two night stop in Bangkok and then continuing with Qantas. Check-in was again smooth and I had chosen our bassinet seats in advance. As this was a codeshare, I called both airlines to confirm. Qantas don’t usually confirm, but BA kindly put a request in for us, as a result I knew our seats over 6 months in advance on the B777. As little A was now nearly walking, I had my husband board first with all the baby gear and I boarded a bit later to give her time to crawl about. There was no point in having a wriggly baby waiting for others to board.

On this afternoon flight, we used the reclining chair type bassinet. My eldest was 11 months. Although I didn’t find out it reclined until after the flight as no one explained this to me. However did she sleep fairly well in it come the evening.

This time we made use of the baby meal and although it was pureed and she was on solids, I supplemented this with food from our trays and from food I had brought myself such as Ella’s Kitchen, some whole fruit, cereal etc.  Unfortunately, just before the flight, Little A had some really severe nappy rash. Along with teething this made for an interesting flight. She threw up all over my husband ( who hadn’t packed a spare set of clothes for him! )  See my packing list here. The crew gave him some bits to clean up the mess whilst I cleaned up Miss A. Needless to say we were all pretty exhausted by the time we arrived. The luggage arrived promptly and the family line at passport control was a welcome site.

Long haul with a 2 year old

We flew to Boston during the summer holidays, despite not having any children at school – so peak season as my husband wanted to run the Vermont 100km. The flight was of course packed. We again checked the pram in at the same times as our bags and walked to the gate. A had a great time in Terminal 5 play area, and as we again boarded last, she had plenty of time to burn off some steam. We sat in a row of 3, and this time had an array of toys and apps downloaded.

She was given a little bag from the staff, but apart from the colouring pencils, it was a little too old for her. Peppa Pig and The Little Kingdom proved popular.  The  child meal was mostly eaten, and we again gave her bits from our trays as well as the hoard of snacks I brought.

The lollipops proved handy for top of decent as she experienced some discomfort with the changing of the pressure. The crew were brilliant on both sectors, especially the return sector, where A had gone through her two changes of clothes by spilling water all down herself. They provided a first class pyjama top for her to wear, which of course swam on her, but kept her nice and cosy. Throughout both sectors, plenty of drinks were offered and the odd chat whilst we walked a couple of laps during the flight.

I have been really impressed with British Airways, especially their family friendly policies and their Avios  air miles household account, which even infants can join and accumulate miles. As always, with every flight and airline some staff are more friendly than others, but at all times they were very professional. I think that being able to choose your bassinet seat  at point of booking is a huge plus, and subject to no last minute changes to aircraft type or operational requirements, they are honoured. The bassinets are suitable for up to 2 years old, so I think this a huge bonus when flying with an older baby. The only change I would like to see, is a policy like Virgin and Qantas which means infants can remain in the bassinets when turbulent – although this would likely mean some adjustment to the current harnesses. If a bassinet is important to you then this a tough airline to beat. 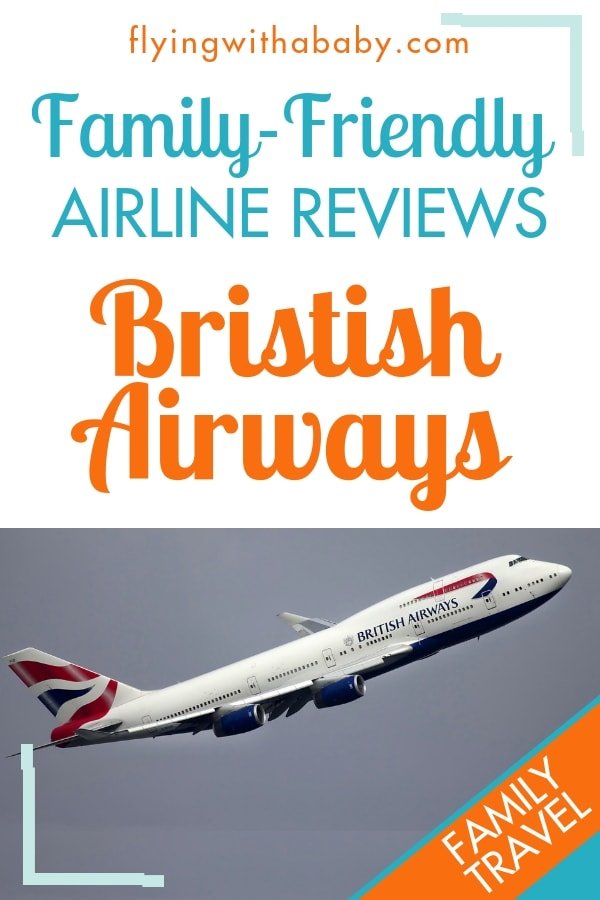