Family friendly airline review by Carrie Bradley – including information gathered from flights between London Heathrow to Kuala Lumpur and return.

Our flight with Malaysia MH001 left quite late at night at 21.45 on a new A380. We had put our two little ones to bed earlier and woke them just before the taxi arrived, so they had a little energy to master security and the boarding process. Boarding was speedy and efficient and we were quickly shown to our bassinet seats. (For full details on the weight restrictions of Malaysia Airlines bassinet see here.) I was given 46D with my 11 month old and my eldest daughter 46E, whilst my husband was just across the aisle on the C seat. His wasn’t a bassinet position but he had a spare seat next to him which proved very handy during the flight. A couple next to me also had a baby so it was only fair that they had use of a bassinet too – besides only an aisle separated us. We settled in for our long flight. 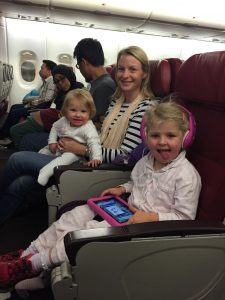 In their PJ’s ready for the night flight on Malaysia Airlines. At the bulkhead position.

Pre take off and seats 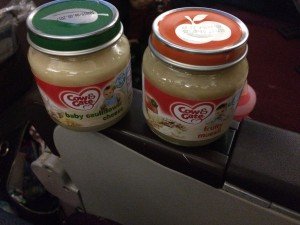 The crew were very prompt in explaining the bassinet procedure; how they would bring the bassinet after take-off, that if the seat belt sign was on the baby had to be removed etc. They also handed me a nappy, a bag for rubbish, and some baby food, plus an activity book for both girls (unfortunately it was too old for them). The seats were comfortable, with a decent recline and the in-flight entertainment was modern and up to date.  TV screens were stowed in between the seats as we were seated in the bulkhead row, so make sure you pull these out before using the bassinet. Tray tables are stowed in the arm rest. The armrest does move between the E/F seat but another parent was sitting there, so it was of no benefit.

The seats had a pillow, blanket and head set ready for us to use.

The child meals were popular with my 4 year old, especially the sweet things- I did manage to hide some the chocolate away though. (Yes- I ate it!) The child meal had some fruit, a juice, crisps with a main meal of chicken nuggets, chips and baked beans. 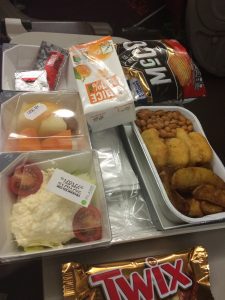 As the flight was night flight, the service began straight away. Unfortunately, they did leave the lights on for quite a while after the service and duty free cart had been through. By this stage my youngest was incredibly tired. I put up my CoziGo bassinet cover over the bassinet, and she was asleep instantly. She slept the remainder of the journey and woke up just as breakfast was being served, so perfectly timed.

The crew were very helpful providing milk throughout the journey for both of my girls. it was UHT milk, but they gave it happily. We had brought some  of toys and also our Kindle, so my 4 year old was happily entertained until she fell asleep. The beauty of night flights both ways, meant there wasn’t any need for much of any of this. The flight also had a good selection of children’s films and TV- should we have needed it.

The return flight MH002 was also a late departure.  We had seats 46 G and H and 47 H this time, but the flight was half empty, so my husband and I took turns in ‘duty’ time. One of us stayed at our allocated seats by the bassinet, whilst the other had an entire row of seat. I actually watched a movie and slept for about 4 hours straight. Bliss! Again the crew were superb. Totally attentive to parents needs and very understanding – 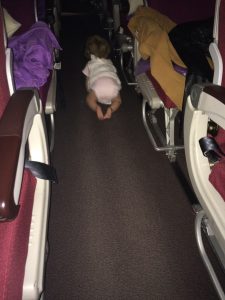 considering that my 11 month old had just decided that a long flight was the time to learn how to crawl!

I was very impressed with Malaysia Airlines and wouldn’t hesitate to use them again for a long haul flight. Their crew were kind and professional and really looked after all the parents.

Is Malaysia Airlines safe to fly?

Whilst I am no aviation analyst, I have compiled some trusted and respected information along with personal experience so you can make an informed decision – hopefully in a non techie spiel. This information is for families unsure who to fly with, particularly from the UK and Australia.

First port of call for research is the airline ratings guide which gives Malaysian 6 out of 7 stars for safety. It does not achieve 7 stars because it has not been fatality free in 10 years.  These incidents are the missing MH370 and the other flight MH17 which was knocked out of the sky by a Buk missile in Ukraine. Both circumstances are HIGHLY unusual in the aviation industry. MH370 will always be speculative until the black box is found but leading expertise is that the pilot deliberately altered the route which led to this tragedy. There are 7 other suspected cases of pilot suicides since 1982, including German Wings in 2015.

With regards to MH17, it  was a tragic case of being in the wrong place. But a very lucky escape for several other airlines who were in the same airspace: Singapore Airlines, Jet Airways, Thai Airways, Pakistan International Airlines, Qatar Airways, Etihad, Emirates, and Austrian Airlines. The flight path taken by MH17 and many other airlines was approved by the International Civil Aviation Organization, and by the countries whose airspace the route passed through. It literally could have happened to any of them.

Would I fly with them again?

Absolutely, yes. This was after both incidents, and we found the flights to be great. The seats and planes modern  they have a pretty modern fleet, with the majority of planes only a few years old.

Pin Save for later 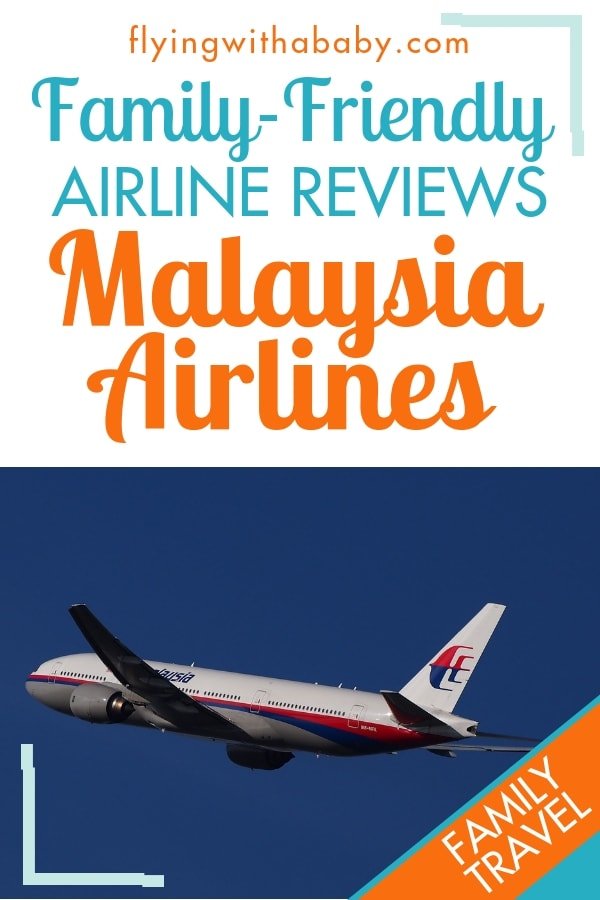 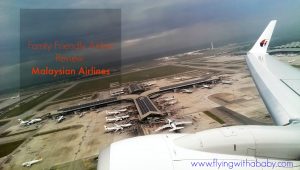 Did you select your seat with bassinet in advance or was it allocated with an infant booking? I have booked same flights as yours and selected seats with bassinet online. However, when I returned to the booking it seems to erase the seat selection. Its odd.

Hello - yes they will get a toy/ game appropriate for their age.

Hello! Did you book in advance for the baby food and UHT milk for your 11 months old infant? I am planning to go with Malaysian Airlines too.. thanks!

Hello - i brought my own milk as airlines only had a very limited amount for emergencies. I did pre order the baby food though.

Im so glad ive seen this review il be flying with M.A by the end of the month alone with my 11month old baby... im looking forward to have a nice experience on his first flight too

This brings such relief to me, as I'm flying with Malaysia airlines in August this year. My husband can't sit next to me as I've booked the bassinet seat. Fingers crossed there is no other babies next to me. My girl is a light sleeper.

I was really impressed with them. :-)