Friends of ours were getting married in San Francisco, which fortunately coincided with my husband’s work trip. I was booked to travel both ways in World Traveller Plus (Premium Economy, but I was treated by Mr FWAB with an upgrade to Club World AKA Business Class.

Here’s my review of our flight from London Gatwick to Oakland.

Check-in was very smooth at LGW in a separate area sectioned off with frosted screens. The walk to the lounge is through all the duty-free and upstairs and then into a further lift. The lounge is fairly standard. Seats were plentiful when we arrived at 8.30 but were filling up by 10.00. However, there is extra seating with tea/ coffee facilities up some stairs. 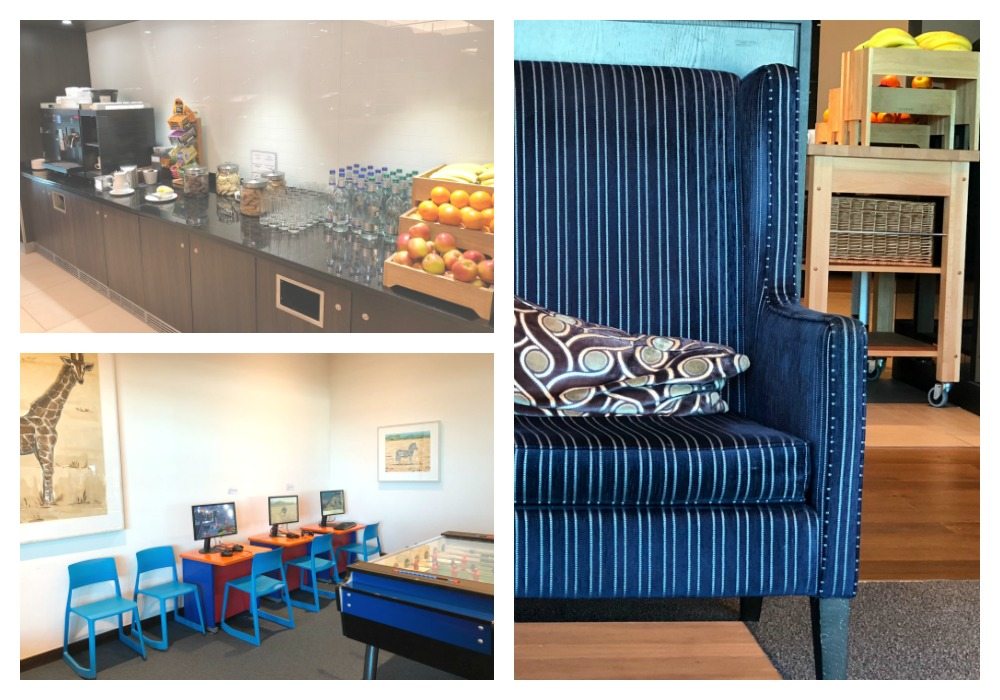 The main area has the usual newspapers, tea, coffee, juices, a range of alcoholic drinks. For breakfast, bacon rolls or omelette and gruyere cheese rolls were available if you wish for something hot. Plenty of toast, fruit, yoghurt, pastries were also laid out. Seating has charging areas and the lounge WiFi password is changed monthly.

For children there is a small Kidzone, mostly suited for those who want to play on the 2 computers or have a crawl about.

The seats already had the blankets, pillows and headsets placed on the seat. Crew came around offering hot towels, newspapers, champagne, juice, and water- plus the kit bags. The glory days of the kit bags have gone in my opinion- at least with British Airways. The eyeshade and socks are made of the synthetic material which is just sweat producing and scratchy rather than cotton. However, the Elemis creams and lip balm are a nice touch and pen and earplugs useful. 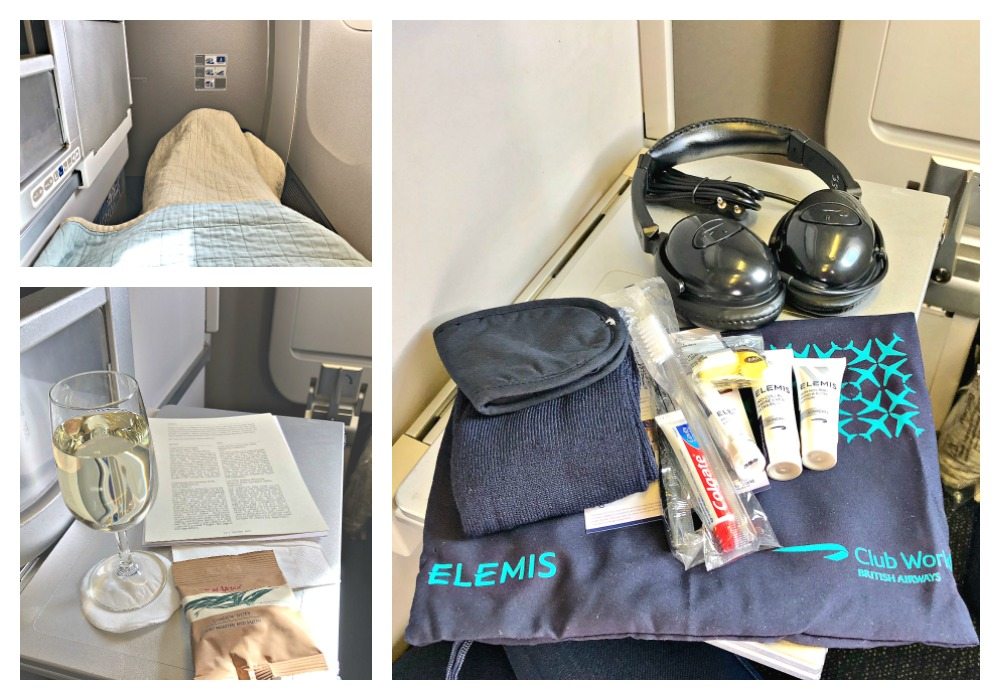 The seat configuration is  2-4-2  and this B777 has 3 classes; economy, premium economy, and Club. Row 5 can put some people off due to its proximity to the galley- but I certainly didn’t notice any excessive noise which stopped me from relaxing. We choose 5 A&B as it’s social for couples or a family – the seat faces each other. If you are flying solo then there is a divider so you don’t have to avoid a strangers look for the duration of a flight. 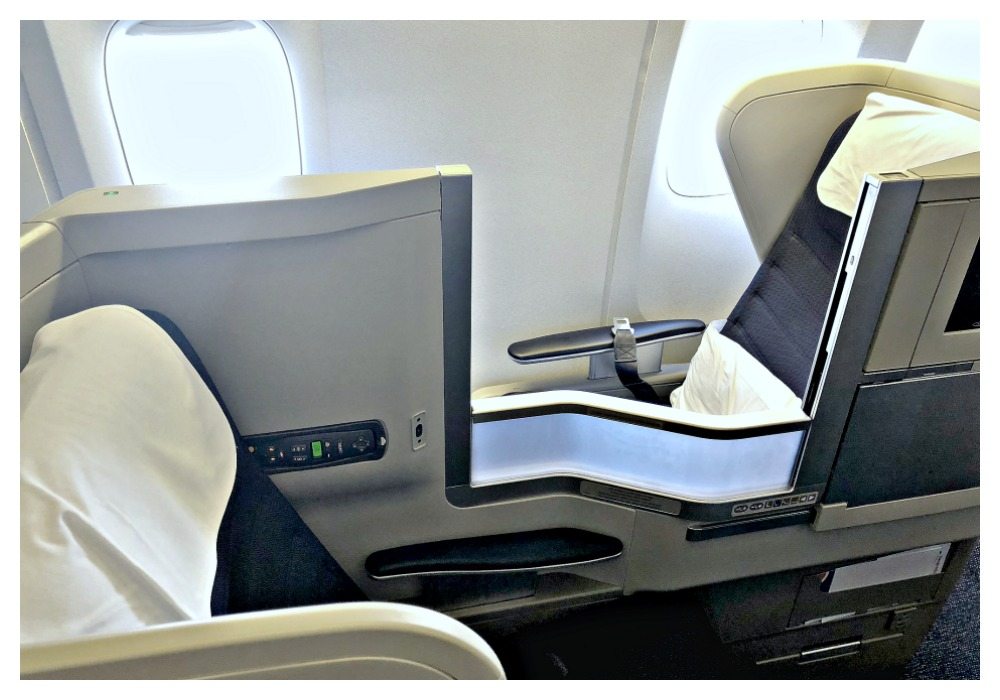 The seat can adjust and recline to various positions and the footstool unlatched for further comfort. For ease, there is a single button to press if you’d like a flatbed or to sit upright for landing. 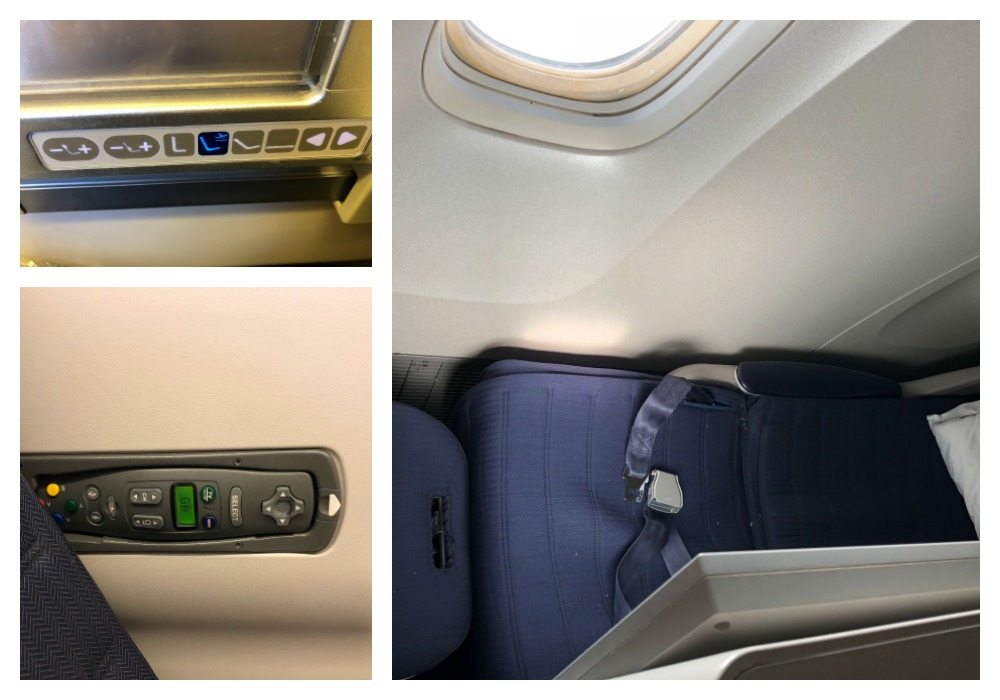 There was no WiFi on this flight and the charging point is located by your feet, next to a small drawer. Not ideal if you like to work and power up at the same time but just about manageable. The charging point is a universal socket but doesn’t work with a standard UK plug! No quite sure what the point of it being there is if you can’t you a British plug on a UK based airline. (even if it’s a USA made Boeing aircraft) 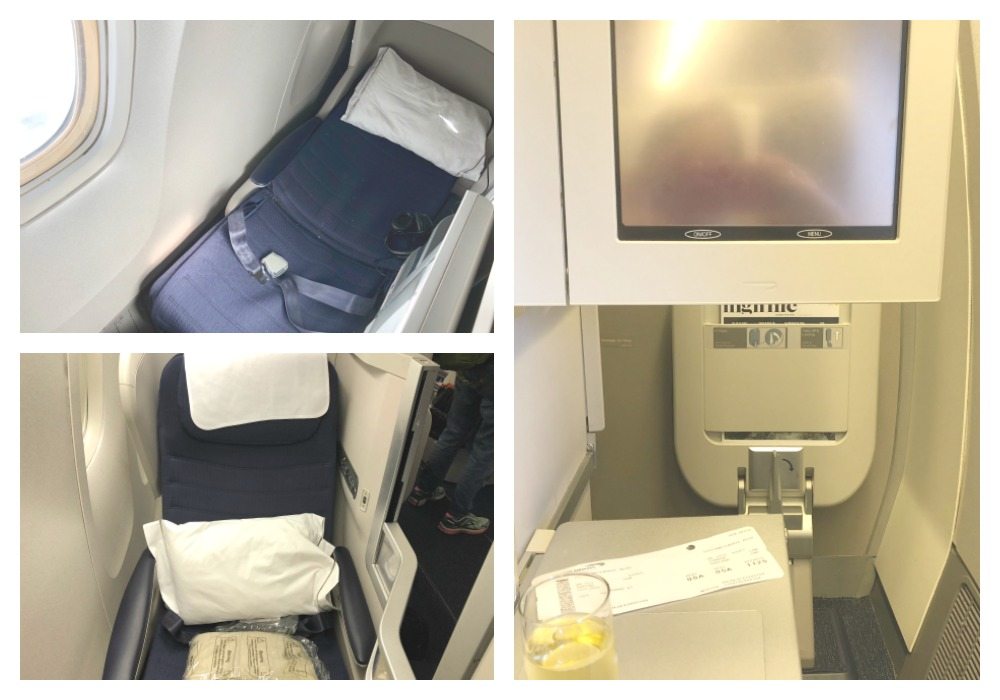 The TV is both touchscreen and remote control – with over 100 movies and channels to choose from. Like most nowadays it’s AVOD. For kids, there is a dedicated section called Skyflyers for kids under 12. Movies included; Captain Underpants, Boss Baby, Smurfs etc. The TV channel shows Cartoon Network and CBeebies for younger tots. A further feature that I really liked was the Skyflyers music and stories. These included readings of The Witches and Last of the Dragons. The screen tilts so makes for easy viewing whichever position your seat is in.

After take off, drink orders were taken. I opted for the Cape Point Vineyards Sauvignon Blanc. For lunch I chose the smoked Scottish salmon with chervil scented slices radish salad and then the giant couscous salad with lemon poached prawns. 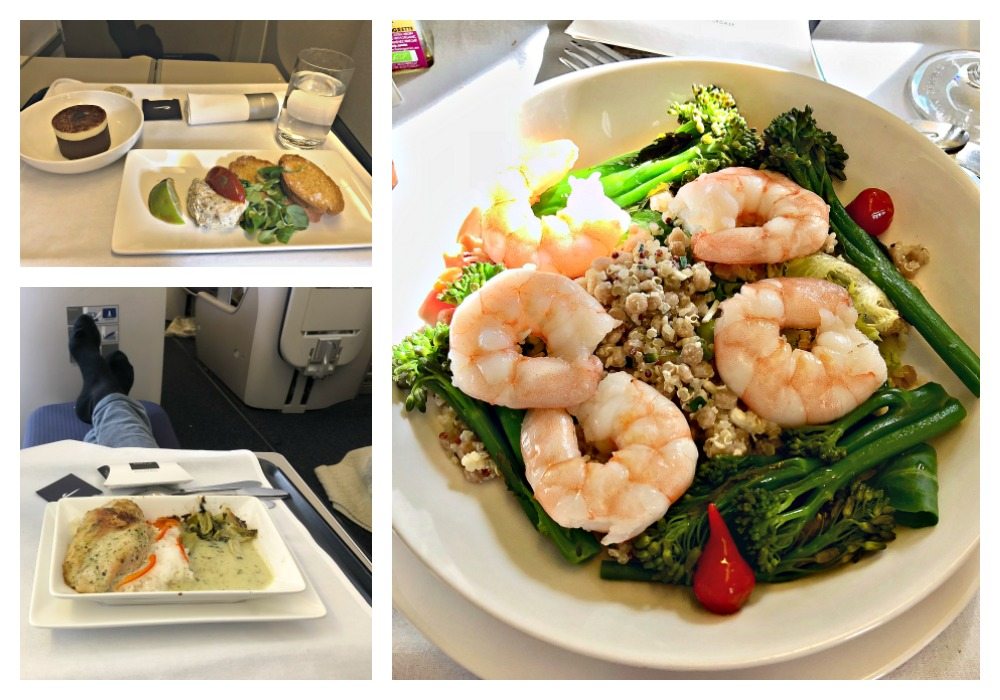 My husband chose the meze plate of aubergine with spiced oregano goats cheese and chilli hummus. For his main, he opted for the Green Thai chicken breast curry. We both enjoyed our meals, although I was disppointed I had missed out on the truffle infused tortellini.

A great feature about Club is the Club Kitchen. It’s essentially a mini buffet area in the galley. Treats include salads, sandwiches, cakes, fruit, artisan biscuits, chocolate etc. If like me, you don’t like bothering the crew- then it’s perfect to grab a snack and stretch your legs. Located in galley behind row 5. P.S They have Cadbury’s buttons! 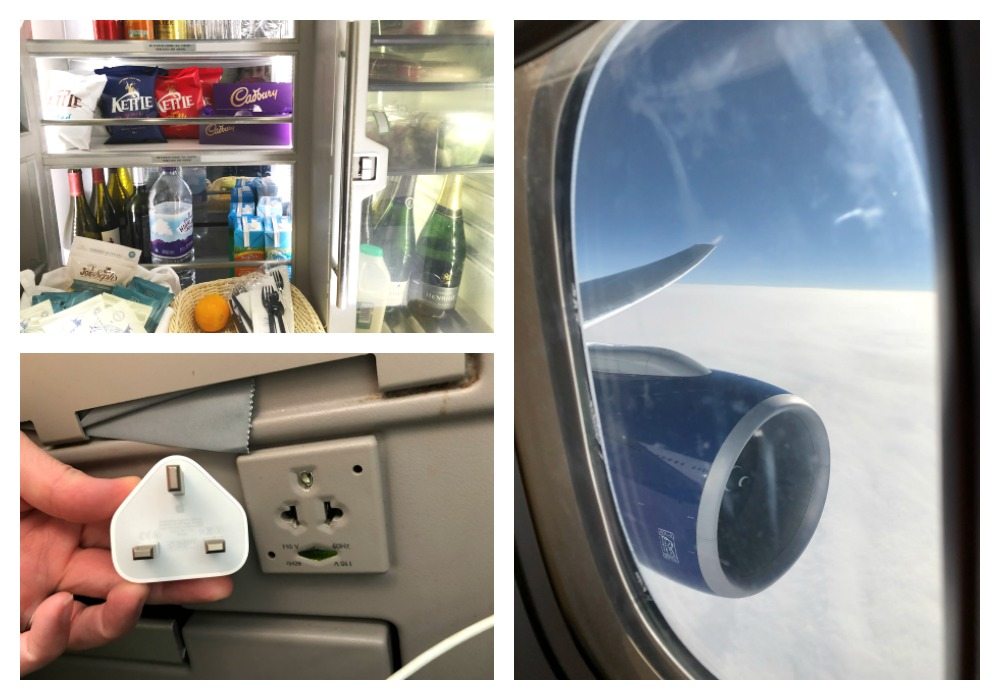 I forgot my headphones, but Mr FWAB chose to use his ever-reliable Bose headsets. However, the British Airways noise canceling-headsets were more than adequate.

Before landing a light meal was served. I chose the peppered smoked mackerel starter which was tasty. Unfortunately, the four cheese tortellini was no longer available so I opted for the cheese and tomato chutney panini. This was disappointing- lacking both texture and flavour. I couldn’t taste the tomato chutney at all. Mr FWAB opted for the lemon pepper chicken breast which he enjoyed. It would have been good to have seen the crew come to us first and offer us first choice for the light meal as we missed our first choice with the main meal earlier- but instead, we missed out both times. However, saying that you can choose a meal in the Manage My Booking section before you depart. I realised this too late though.

The crew came around at least once offering a drink in between meals – but tea and coffee was only offered once after the first meal. We asked a couple of times as even airline tea tends to be better than what I’ve found in the USA. (Sorry America, I love you but not your tea and ‘cream’ so much!).

Overall, I think the seat is worth it for a long haul treat. Our flight was over 10 hours and it’s always nice to have the option to be horizontal. Most of the food was tasty bar the panini.

Bring your own power charger pack unless you have a USA plug socket or a mini UK plug if you need to charge up onboard.

Download some movies for you as the New Release section are not that new. One was from 2014 although Wonder Woman was current.

Compare prices for your route below. 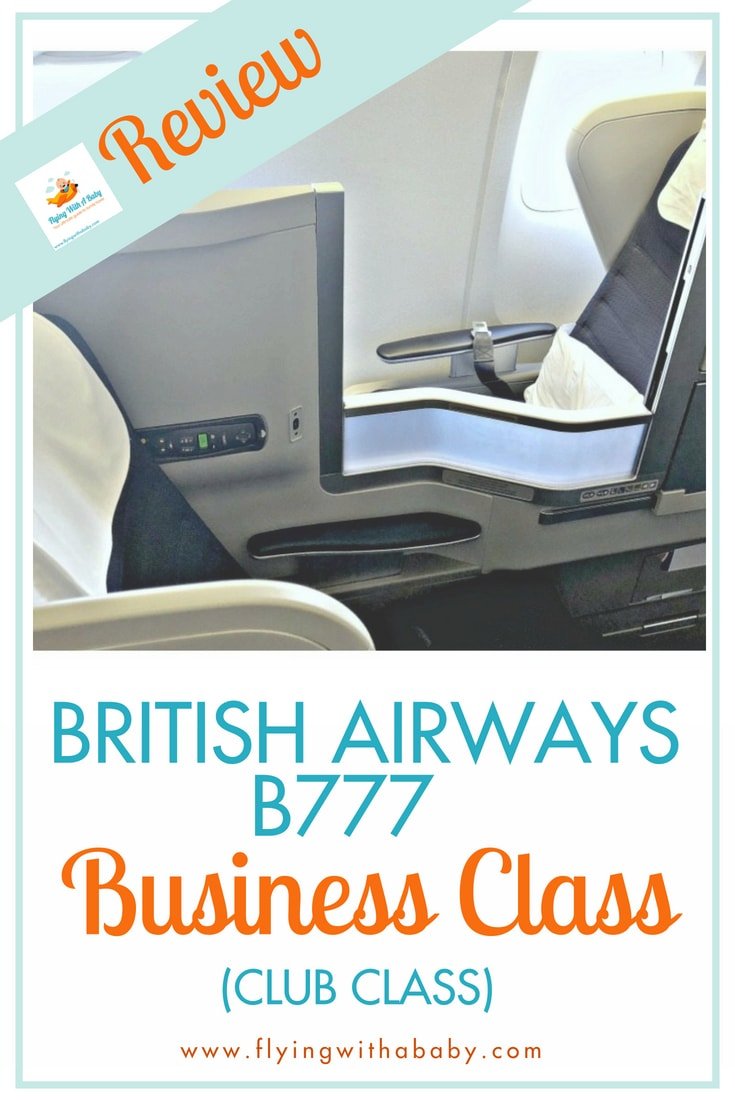 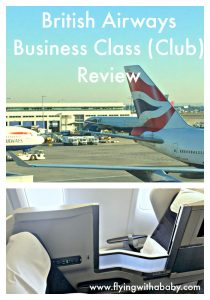 I fly between London and NYC on business class all the time and it looks nothing like this. Are you sure it was a BA flight? BA business class is like sleeping on the London tube. It s rough. Someone even got bedbugs there a few months ago.

Hi, yes it was definitely British Airways. However, they have recently changed to The White Company products and will be rolling out a new business class seat from January 2019.