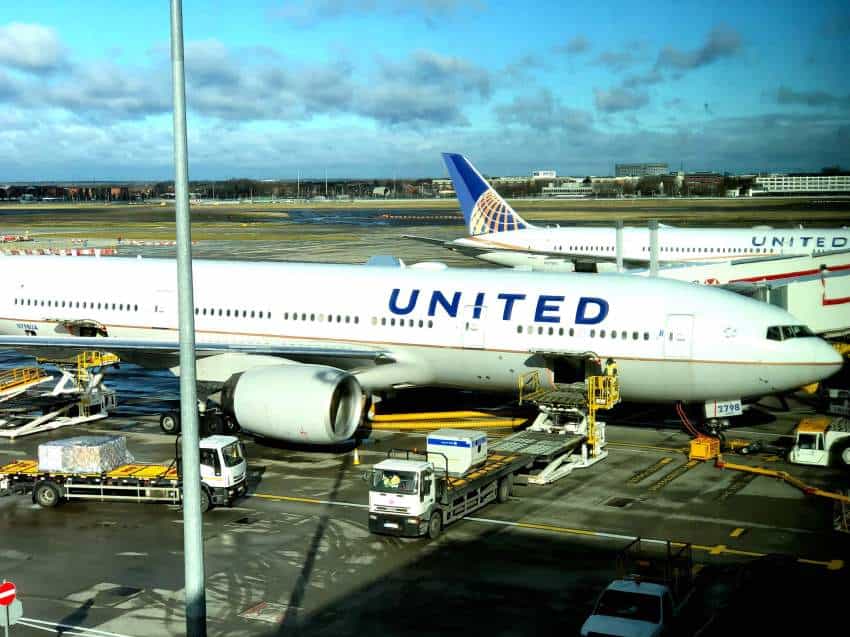 I’ve previously stayed clear from American based airlines, mainly because when mine were under 2, the possible scrum for a bassinet at the boarding gate concerned me – as with other airlines you can request in advance and with some choose your seat for free. (Here is United Airlines bassinet policy.)

However, with no need for a bassinet anymore, we decided to try United on our first family trip to Orlando with a toddler and her older sister. As we booked SO last-minute we couldn’t go direct unless we paid a small fortune, so we first flew long haul with United to Chicago and then short-haul from Chicago to Orlando.

Long Haul was definitely the better experience, as we had some incredibly rude swearing crew on the short-haul inbound flight – miffed that I used the loo upon landing. (My daughter had been asleep on me after a very long day so I didn’t want to risk waking her or other passengers so I waited desperately until we had landed). Anyway, that is a story for another time. Thankfully all the other flights on United were MUCH better!

The United lounge is located in Terminal 2 Gate 1B. It’s a good 10-15 minute walk past the main shopping area, so do get any larger purchases you need beforehand. A smaller Boots, WHSmith is available near the gate if you do need any last-minute bits and bobs or want to pick up your pre-order service from Boots

Gate 16 in Terminal 2 has a small soft play area to burn off any steam before boarding.

The lounge opened in 2014 and provides complimentary Wifi. The modern decor is punctuated with retro black and white photos from the glory days of flying which lends to a stylish look. With separate work areas, a fabulous viewing platform and an array of food and beverages it is a calming place to spend pre-boarding time.

The flight was every punctual and the whole boarding experience was a very swift process. Additional passport checks are made and then you scan your boarding card at the gate to be allowed through.

On embarking the aircraft the seats have a pillow and blanket on.

The seat reclines and has an adjustable head rest. The TV is quite small compared to other airlines and doesn’t adjust according to your seat position. However, it is perfectly adequate and does the job.

There are no extras given to kids, but headset ear buds are handed out after take-off.

This video shows a little more about the flight.

Does United Airlines have TV?

There are several kids movies and TV available but for the full library you need to download the United app first. If you haven’t done so beforehand, the only option is to pay $11.99 for the onboard wifi.

As with all onboard wifi the signal can vary where you are and after half an hour we still couldn’t download the app.

However, fear not, if your tablet isn’t working and you can’t or haven’t downloaded the app, the onboard TV on the B767 will play a movie. For our flight, channel 6 repeated Finding Nemo which is always a hit.

The children had child meals pre-ordered which were chicken nuggets, mashed potatoes  and vegetables, whereas I had the cannelloni and my husband  devoured the chicken curry.

Pudding was stawberry and clotted cream ice-cream. Yum! Vegetarian seemed to be choice that they had a few of. The video above shows a lot more!

I found the crew to be pleasant and friendly, a contrast to one of our short haul internal flights from Chicago to Orlando.

United have to compete with airlines who often seem to have a bit more budget available, but I felt the TV, seats etc were all on par with others and the prices are usually the best value. Flying United Airlines was definitely better than I expected. To compare prices, see below.

Carrie Bradley is a passionate and experienced enthusiast of airline and family travel. She has over 12 years flying experience as a flight attendant to over 60 destinations. "Since becoming parents to two little girls, we've flown extensively as a family; predominately as we have close family in Australia and because we love to explore. Our eldest has completed over 80 flights and the younger one is catching up! I hope our travelling experiences, knowledge and research help make your trip, day out or experience worry free and easier too. Whether you are heading to a theme park, camping, flying for the first time or heading off on a beach or city break with kids, this site has you covered for inspiration, tips and practical family travel information all around the world!"

Join the Flying With a Baby mailing list to keep up to date with all the news and information about family travel. Click here to fill in your details.