Things To Do In Jordan With Kids

I have to say, when my mum suggested we go to Jordan for Christmas last year, I didn’t jump all over it. Somewhere that is on many people’s bucket lists, it’s never really been on mine. Add to that the fact that I really wasn’t convinced it would be a very family friendly holiday and you can see why I wasn’t mad keen. After consulting with a few friends and fellow travel bloggers, it seemed we might have got our facts wrong. Living in the Middle East, you can’t really argue with a destination that’s right on your doorstep so we booked our flights and off we went. I still had some trepidation… travelling with kids in Jordan? I just didn’t think it could be a family dream destination?

Turns out there are plenty of things to do in Jordan with kids! From start to finish Jordan was ah-maz-ing! While we were researching and booking the trip I realised we needed much longer than the 3-4 days I had originally anticipated. Turns out there is so much more to do that *just* Petra and the Dead Sea. (Altjhough make no mistake, there’s no *just* about Petra or the Dead Sea).

What to do and where to go 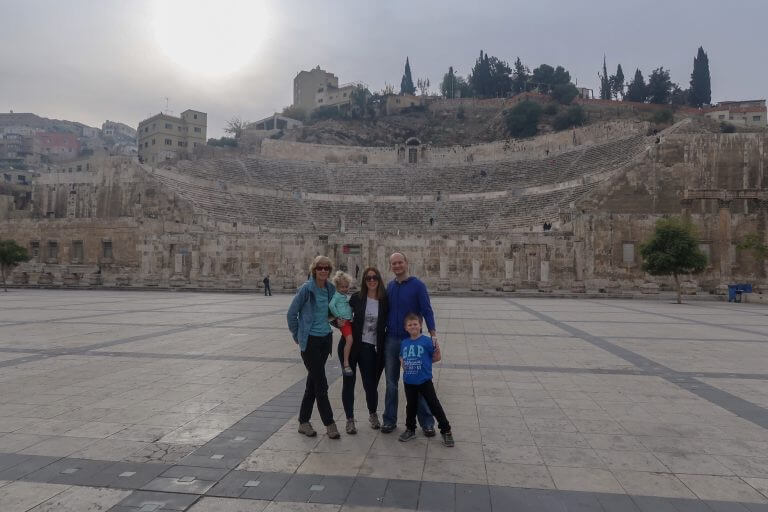 You’ll fly into Amman so I’d usually recommend at least a day there exploring the city. There’s much more to see than in most Middle Eastern cities because it has so much more history. With the Citadel ruins and a Roman theatre to see, not to mention some seriously good foodie checkpoints, you’ll easily fill a day or 2 here. You can also visit the absolutely amazing Roman ruins in Jerash and / or Aljoun castle as a day trip from Amman or on your way somewhere else. The kids can have fun clambering over fallen Roman Walls and trying new foods. (Even my kids tried – and spat out – the best falafel I’ve ever had). 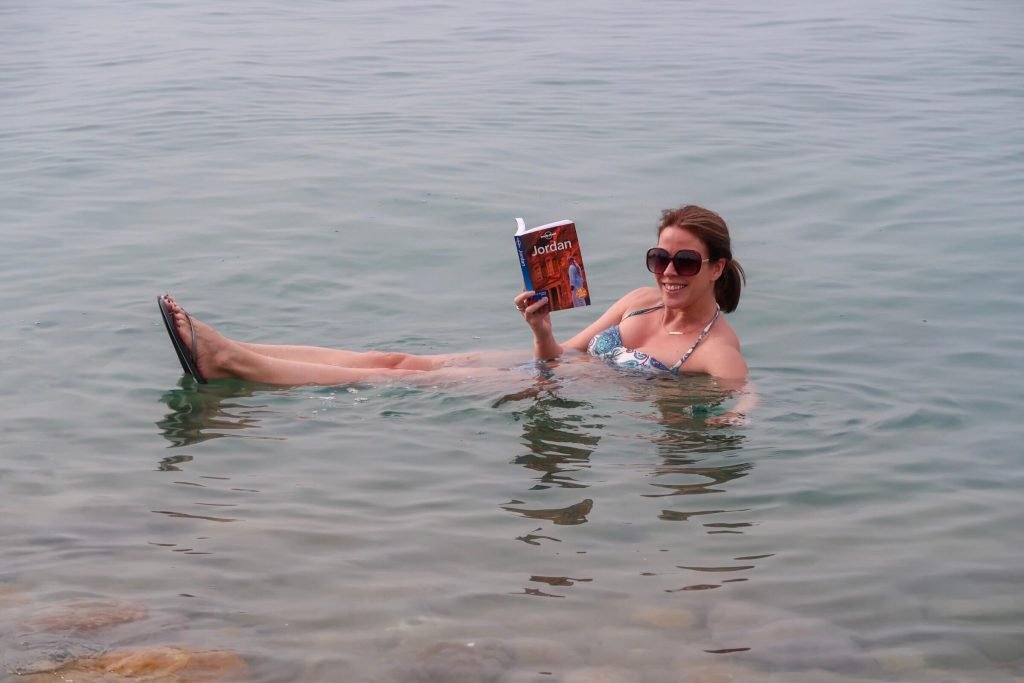 I’ve no idea what I was expecting from the Dead Sea but I found it really fascinating. The feeling of being in the sea but just floating in a static state is really surreal. You do have to be a bit careful with kids – the incredibly high salt content means that their more sensitive skin may start to sting. If they get it in their eyes it’ll probably be game over. While there isn’t loads to do in the Dead Sea itself, it’s quite nice to have a day exploring the sea and your resort, plastering yourselves in mud and maybe indulging in a spa treatment. Other sights nearby include Most Nebo (where Moses was shown the Promised Land), Bethany (Jesus’ baptism site) and Madaba (location of the world’s oldest mosaic map). All of these can be done as a day trip from where you are staying in the Dead Sea or on your way to or from another location. 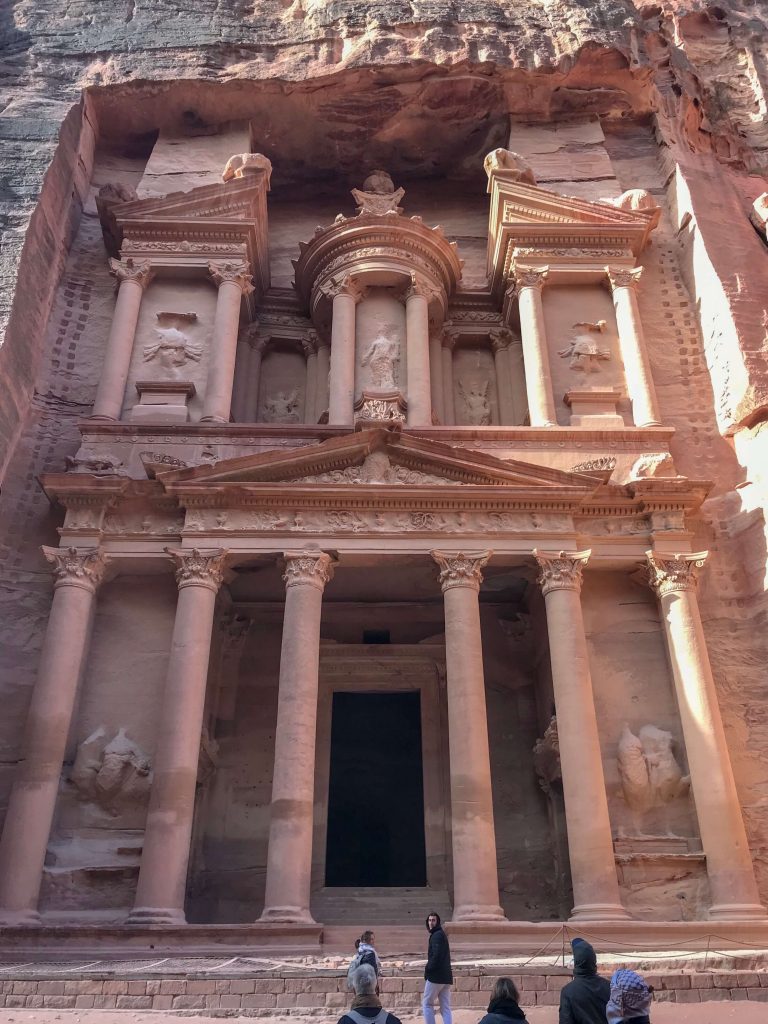 I mean you say Jordan and you see the iconic pictures of the Treasury in Petra. Steeped in fascinating history you wander around in total awe of the entire site. Our guide told us that they believe what we can see is only 80-90% of what was once there. The rest is buried and they are going to really limit excavation. They’d prefer to let the tourism trade slowly erode what is there and unearth the new discoveries for generations to come. To keep it kid friendly I’d strongly suggest a horse and cart through the Siq to get to the Treasury to save little legs. Limit your expectations – as much as I wanted to climb to the Monastery, it just wasn’t realistic for us on this trip and I wanted to leave on a high rather than risk overdoing it. 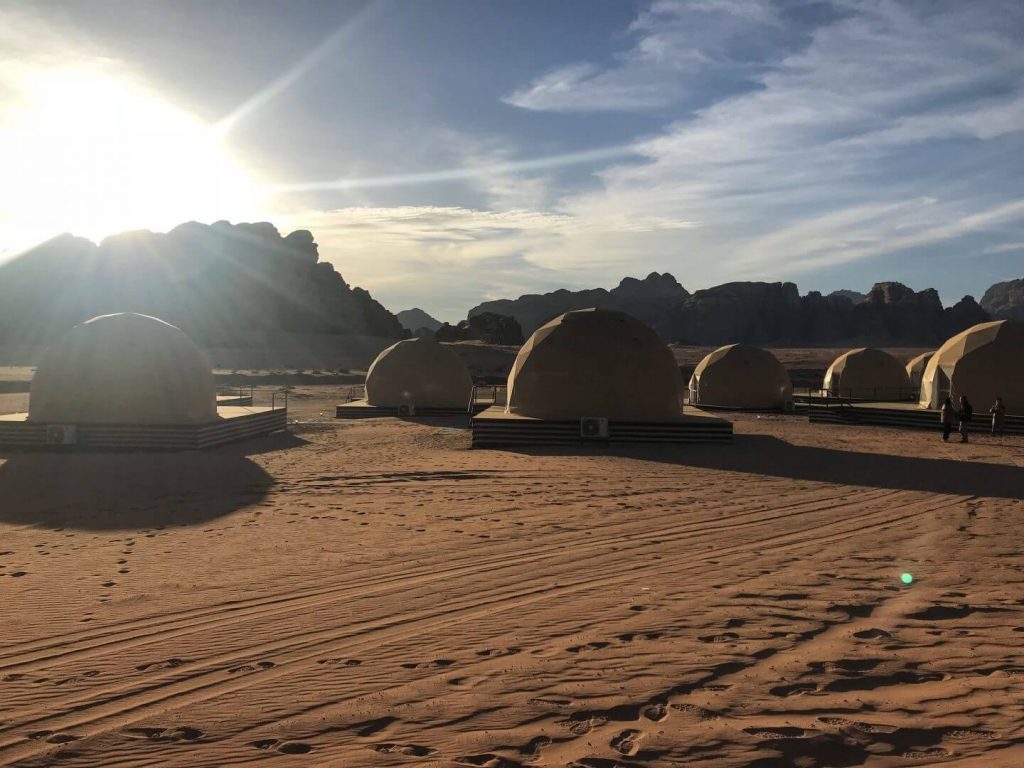 One of the hidden gems of Jordan, a night “camping” in Wadi Rum is an absolute must. I’m sure there are much more rustic and authentic experiences that you can have but we absolutely loved our experience staying in Sun City and being shown around by a Bedouin guide. The kids loved climbing sand dunes, climbing into canyons and bouncing around driving round in an old Land Cruiser. Dinner was a show to watch being dug up from the ground. We even found a few things that the kids would eat which was completely unexpected!

We finished off the trip with a couple of days of R&R at a resort on the shores of the Red Sea. Where we would have once spent as much time scuba diving as possible, we took the kids on a submarine trip, hung out by the pool and ate by the water every day. The perfect way to finish. Tthere are plenty more ruins to visit if you’ve got the time and energy).

Public transport isn’t available so you really need a car to get around. Self driving is absolutely doable and I’ve got friends who have done it without any problems at all. It’s by far the most cost effective way to get around. We opted to have a driver which we really enjoyed. His English was excellent and he was as much a tour guide as a driver. You can get a discount with the company we used if you mention Wanderlust and Wetwipes blog when you book. I’d highly recommend them.

If you are booking your own accommodation, check out the Entertainer app. It’s not cheap but gives you 2 for 1 on a variety of hotel stays so it pays for itself in one night.

Emma’s a pushing 40, travel-mad mum to 2 young kids (aged 6 and 4) and a crazy dog. Originally from the UK she’s lived in 10 cities across 5 continents all over the world. She currently lives in Doha, Qatar. Emma started blogging about her family travels in 2017 when she had an epiphany about how to have successful adventurous family holidays.

Loved re-reading your post & tips again! We booked ourselves flights to Tel Aviv and flying back from Amman for Easter hols - planning to spend about 4 days in Israel and 6 in Jordan - any experience / advice for the border crossing? We've done Israel self driving amazing hols about 10 years ago and ventured to Tabah in Egypt but it will be our first time in Jordan.

Oooh enjoy! Have an amazing time!